11) The Kerala government is ready to launch a campaign called ‘Mathru Kavacham’ to make COVID-19 vaccines available to all pregnant women in the state.

As part of the campaign, all pregnant women will be registered for vaccination at the ward level by ASHA workers. Those who can register themselves will be encouraged to do so.
Kerala: –
Cherai Beach
: Kerala: Idukki Dam on the Periyar River
Kerala: – Pamba River
Governor: – Arif Mohammad Khan 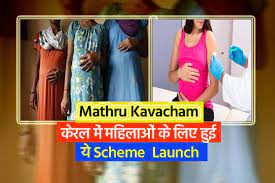